The DLG Innovation Committee, an independent expert jury appointed by the DLG (German Agricultural Society), has selected the Innovation Award winners of EuroTier 2021 from the 80 nominees according to stringent criteria. One gold and seven silver medals have been awarded. 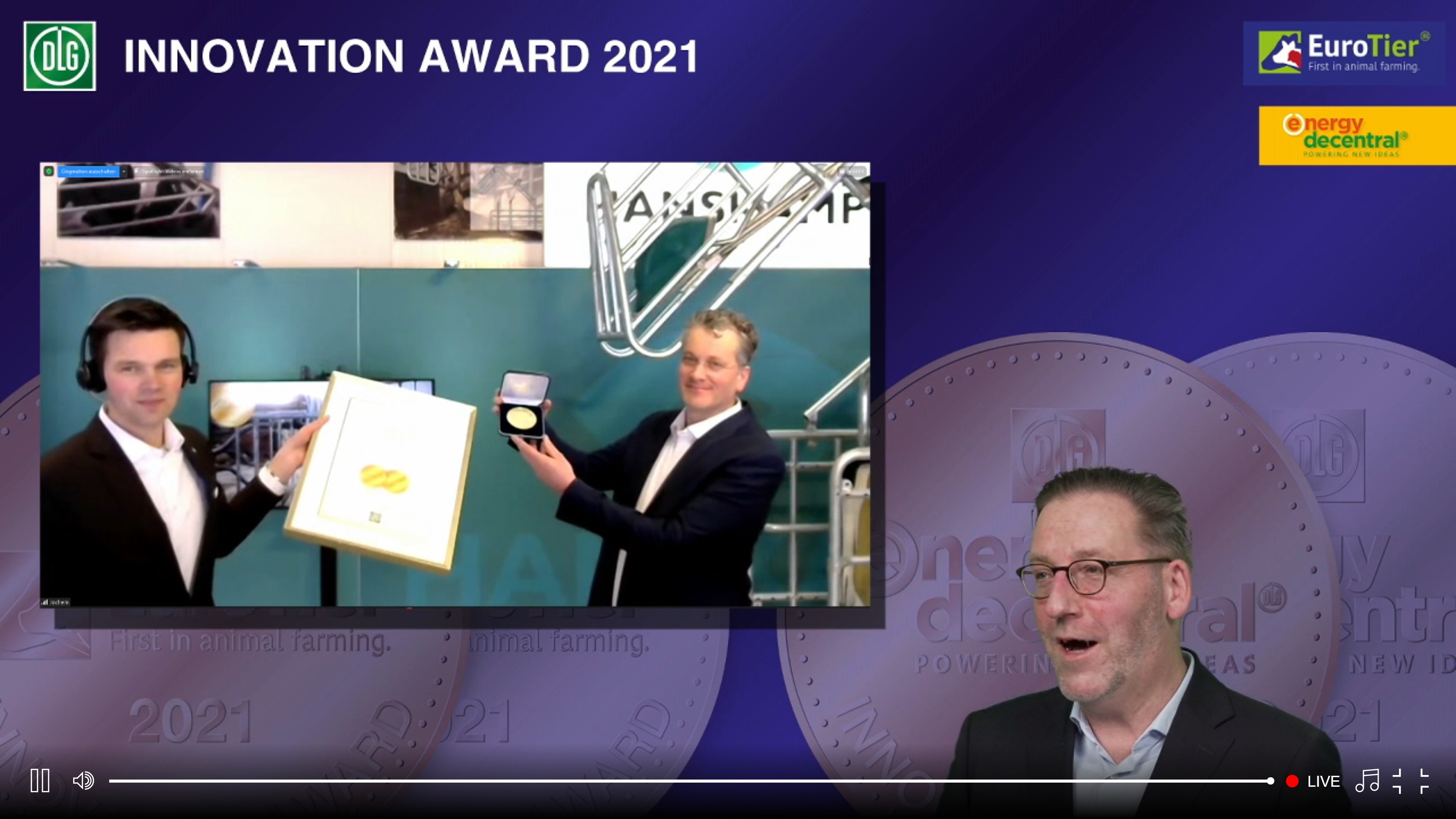 The reduction of emissions from animal production is becoming increasingly important. While measures to tackle this issue have long targeted the emissions that arise in animal housing, the current focus is increasingly aimed at reducing their occurrence in the first place, either technically or, at process level, preventatively wherever possible. Additionally, dairy farmers are obliged to look for potential ways of reducing ammonia emissions and effectively implement them. A high volume of ammonia is produced in dairy farming, notably from the 15 to 20 litres of urine that a cow produces each day.

The CowToilet developed by Hanskamp, a company based in the Netherlands, is a revolutionary product that tackles precisely this problem. The innovative system consists of a feeding station and a collection facility for the urine. At the end of feed output, an external stimulus is used to trigger the urination reflex and the urine is then collected. In an innovative and intelligent manner, the Hanskamp CowToilet collects the urine directly and separately from the cow without causing stress to the animal.

The formation of ammonia on the floors is reduced thanks to the early separation of faeces and urine. The floors also remain cleaner, which has a positive impact both on hoof health and on the air quality in the animal housing. In addition, the farmer has the choice to use the separately collected faeces and urine in a targeted way in either crop production or power generation, which further increases nutrient efficiency.

Egg-laying chicken genotypes are considered unsuitable for producing poultry meat, due to lower product quality and cost effectiveness. For this reason the male chicks of these breeds are generally not reared. The culling of day-old male chicks has become a societal and political issue, with a ban on this practice being considered. In-ovo sex determination is regarded as an alternative, with hormone analysis on the 8th or 9th day of incubation currently being the most extensively developed and commercially useable method. The SELEGGT Acus sampling system, developed by respeggt GmbH for this purpose, is already in practical use. Sampling the test fluid from the allantois using a needle, this system is only partially automated. The risk of injuring the allantoic membrane exists, which can lead to a reduction in the hatching rate. The hourly capacity of a single sampling unit for this system is around 600 eggs.

The innovative SELEGGT Circulus system is a significant leap forward compared to the predecessor system. Operating fully automatically, the allantoic fluid samples are generated in a non-invasive way. Cleaning the sampling needles is therefore no longer necessary and the sampling time has been reduced to just one second per egg. In three-shift operation with 20 hours of operation per day, one SELEGGT Circulus sampling unit therefore has a weekly capacity of 360,000 hatching eggs, corresponding to 150,000 to 180,000 laying chicks, a significant increase in performance in comparison with the predecessor system.

Non-invasive sampling and the vastly increased hourly capacity have established the prerequisites for universally replacing the previous culling of male chicks in hatcheries with in-ovo sex determination.

Hygiene is critical in all livestock populations – amongst other situations, this is also the case during feeding in calf rearing. The risk of pathogens being passed from calf to calf is particularly present during automatic feeding.

The Alma Pro Hygieneset from URBAN GmbH represents the innovative use of well proven UV-C irradiation, reducing the microbial load in calf feeding. Specific UV-C irradiation at relevant hygiene points of the automatic calf feeder is intended to lead to significant improvements in comparison with previous technical concepts for reducing microbes. Besides the UV-C irradiation of the boiler water, which ensures perfect water quality for mixing the feed from a hygiene perspective, the additional, monitored irradiation of the teat represents a vast improvement. In short feeding breaks between the individual calves, the teat and the adjacent contact surfaces are irradiated, thus killing a multitude of pathogens during operation. The risk of microbial transfer by the calves is also reduced thanks to this microbial reduction and reduced microbe multiplication.

Compared to other sanitisation methods available on the market, URBAN's Alma Pro Hygieneset is a safe, resource-efficient and chemical-free option for reducing microbes in the calf feeder area.

One of the most sensitive areas in dairy farming is calf rearing. Automatic calf feeders have proved invaluable, ensuring both the animal’s welfare and its feeding needs. Powdered milk is commonly used in the automatic feeders but also whole milk to a lesser extent or a combination of both.

Fluctuating dry substance contents in new powdered milk batches necessitate constant checking and adjustment of the automatic feeders' basic settings to achieve a consistent powdered milk concentration in the feeder milk and optimum feed qualities. In practice, this important activity is occasionally skipped due to time constraints, as the milk replacer concentration has to be adjusted manually on the automatic feeder after calibration.

The Brix-TS Sensor is an electronic refractometer sensor that has been integrated into the mixing tank of the 'Calf Expert' automatic calf feeder where it continuously measures and monitors the dry substance content of the freshly mixed calf milk. In the event of deviations, the system automatically corrects the concentration in the feeder milk. If whole milk is used, a consistent dry substance concentration can also be ensured in the feeder milk by adding powdered milk if necessary.

With the Brix-TS Sensor, Holm & Laue is therefore launching a technical solution onto the market that can guarantee continuously consistent calf feed.

The formation of ammonia on the floors can be reduced through the early separation of faeces and urine. In dairy farming, animal urine is one of the main causes of ammonia emissions, particularly when it remains on the floors and in contact with the air and faeces for long periods of time.

With the Delta X Pack, French company Bioret has further developed a noteworthy product, which enables faeces and urine on the floors of dairy cattle sheds to be collected automatically, quickly and easily and then transferred to separate storage areas. To accomplish this, a contra-rotating conveyor belt system has been integrated into a rubber mat system with a 3% gradient. The belt system diverts the urine collected in the central gutter to the liquid store and the animals' faeces to the solid material store.

The fast and effective separation of faeces and urine is extremely important not only for keeping the floors clean but also for fostering animal health and improving the indoor animal housing environment. The environmental impact may also be reduced as a result.

The potential for issues in calf rearing is higher in larger herds. An increasing number of calves inevitably leads to a higher risk of infection and therefore makes greater demands on hygiene and disease prevention. Maintaining an overview of the population and early intervention, should difficulties arise, become even more difficult if inspections are carried out by different people.

The Calf Monitoring System is a precise, energy-saving and non-invasive sensor system that offers early disease detection in calves. A passive infrared sensor is used to observe the calf's behavioural pattern and the data is promptly evaluatd employing AI. The information is made available to the farmer directly via an app and an online platform, therefore enabling the calf's health to be monitored continuously. This does not replace the daily inspection by the farmer; instead, the continuous monitoring and rapid feedback provide him or her with valuable support.

This improvement in livestock monitoring ensures that developing diseases can be detected earlier and therefore treated earlier. As a result, the course of the disease may be milder with a corresponding reduction in calf mortality, generally increasing animal welfare and health.

Spreading liquid manure and fermentation residues close to the ground and with correspondingly low emissions is very important due to reasons of environmental and resource protection. Because of the size and weight of the booms, modern spreader technology all too frequently reaches its physical limits, particularly on hilly or even mountainous terrain in designated grassland regions.

The Möscha Spreader boom with plastic pipe as a supporting construction element is characterised by its simple and, at the same time, extremely lightweight design. Möscha achieves lighter boom weights by using covered plastic pipes instead of a a design exclusively using metal. This development of the product to use alternative materials significantly reduces the weight of the folding boom.

Besides saving both material and fuel, this also extends possible applications of the system, because the precise spreading of liquid manure close to the ground with a drag hose or drag shoe attached to corresponding boom technology can also be used on lighter trailers requiring less tractive power and on more extensively contoured terrain.

The hatching eggs from broiler parent livestock farms are delivered to central hatcheries, where they are sorted according to quality and weight before being placed into the incubator. In addition, eggs that are not positioned with the blunt end pointing upwards in the tray have to be turned. This leads to a high number of incompletely filled trays that have to be manually refilled. Often, the eggs are also transported on conveyors where they can come into direct contact with one another, possibly resulting in damaged shells.

The system significantly reduces the likelihood of damaging the egg shells and automates the hatching tray filling process. This considerably lightens the workload and leads to an improvement in hatching rates in the broiler chick hatcheries.

Next year, EuroTier the world's the world's leading trade fair for animal production, and EnergyDecentral, the leading international trade fair for innovative energy production, will be held exclusively as a digital version, 9th to 12th February 2021. An extensive digital technical program on current topics of international livestock farming will be inviting animal husbandry professionals to the digital trade fair platform over four days to exchange ideas with experts from all over the world, get to know the latest offers from exhibitors and network with exhibitors and visitors in a targeted manner.

Deliver the 'unbridled power' of postbiotics